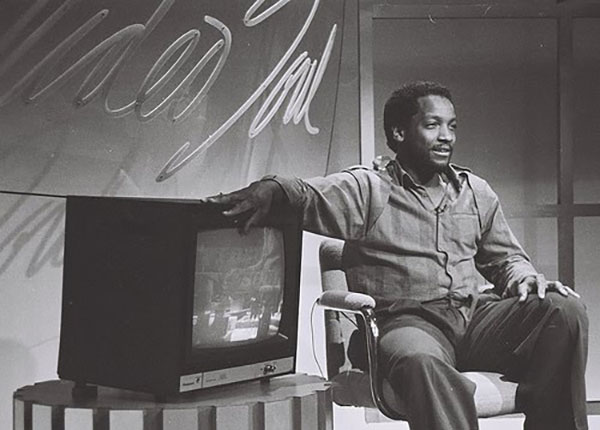 Video Soul was one of the most seminal television programs in the history of both black popular culture and American music. Premiering in June 1981, and hosted by veteran radio deejay Donnie Simpson, the original flagship series for the BET network curated music videos and featured countless black recording artists and musicians seated on a leather sofa for interviews. Throughout its run, it was responsible for surprise guests, bringing groups/bands back together, memorable interviews and breaking entertainment news. A number of up-and-coming artists had their first interview on Video Soul.

Quoting verses from Elton John’s “Rocket Man,” an extremely modest Simpson says hosting Video Soul was just him going to work everyday. “It was just my job five days a week,” says Simpson during a brief interview at the National Action Network’s sixth annual Triumph Awards. “I always knew it meant something to artists. When you’re doing what you do, you’re just doing what you do (laughs). You don’t think of it in terms of pioneering.”

Video Soul was originally a half-hour show. It was devoted to helping showcase R&B/soul recording artists and performers. The show was created after MTV refused to play videos by most African-American musicians, as MTV made the De Facto Colour policy effective. Both BET and Video Soul served as the place of refuge for African-American musical talent. The expanded 2-hour long Primetime version debuted on June 26, 1983 and aired from 9-11 p.m. Eastern Time, Monday through Thursday. A top 20 countdown aired on Friday nights from 9 p.m. to 11 p.m. Eastern Time as well. Throughout the early mid-1990s, until the show ended, it aired from 8 p.m. -10 p.m. Eastern Time.

Additional confirmation that cemented Simpson’s legacy came when VH-1 profiled Video Soul in a segment for the network’s documentary series, Black in the ‘80s. His interview on the nostalgic miniseries proved to be the eye opening a-ha moment. “It was the first time I ever had my work put into any kind of perspective,” says Simpson.

If you did not grow up in the Washington, D.C. area, most never really experienced Donnie on radio as much as they did while he was the host of BET television show, Video Soul. The program was a nightly staple in most African-American households. Every night followers would find themselves planted in front of the television, watching the latest videos of the day with Donnie interviewing their biggest stars.

Video Soul was one of the best shows on television back in the day, and in a time when urban music was still fighting for recognition on the airwaves, Donnie gave a platform to such artists as Take 6 that would’ve never made it onto MTV.

Donnie signed off of Video Soul in 1996 after 14 years. He quickly became a household name rivaling MTV VJs with his infectious smile, suave voice and green eyes. It never occurred to the purveyor of music clips by primarily African-American performers that he was a star himself in many respects. Fast forward to today, where most “music” channels rarely even play music videos, and you will notice that Video Soul was more than ahead of its time, immortalizing Bob Johnson and Donnie Simpson as pioneers in their own right.

And, now Donnie Simpson's Video Soul is BACK! Streaming now on Tubi. 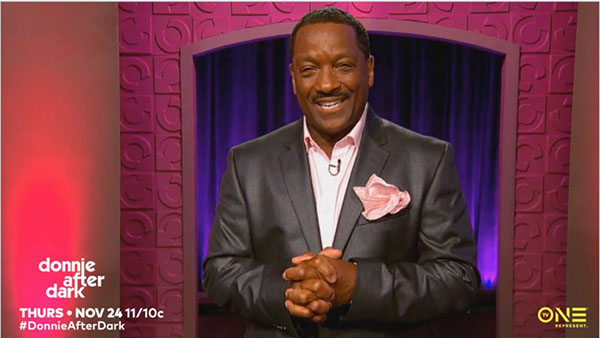 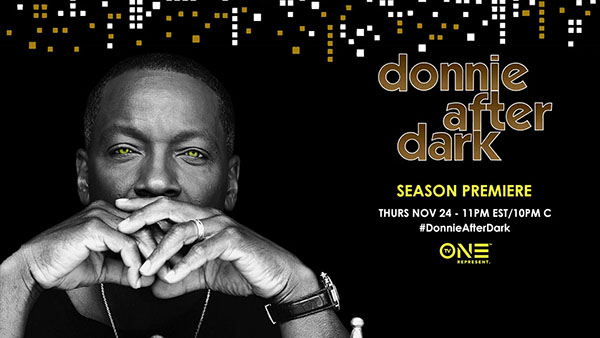 A private party where the grown and sexy go to have cool conversations with celebrity guests and listen to live jams. Celebrity guests join Donnie for fun conversation on music and current events while being surrounded by an intimate group of guests.

Season 1
The first Season of Donnie After Dark included two episodes which were taped at the Xen Lounge in Los Angeles, CA. In addition to Donnie Simpson as the host, the regular cast included co-host DJ Traci Steele (of Love & Hip Hop: Atlanta), along with the show's official house band—the all-girl Atlanta-based group "The GGs Band".

Season 2
The second season of Donnie After Dark was taped in Atlanta, GA with a live-studio audience in attendance, and included a total of 4 episodes. DJ Traci Steele returned as the co-host and social media expert, along with "The GGs Band" as the official house band. 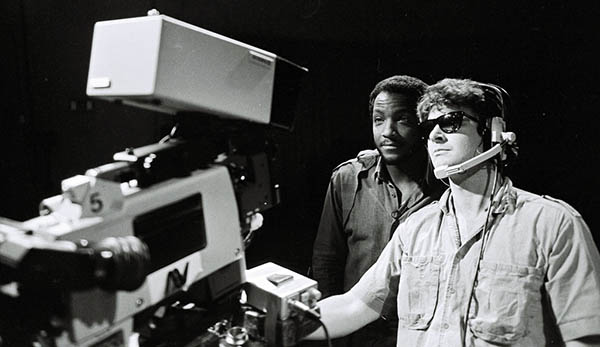 Donnie Simpson’s career is a fantastic blueprint for anyone who seeks longevity in broadcasting. The longtime radio and TV host, whose career spans 50 years now, has a proven style that has earned him local and national recognition. While Donnie may be best known as host of Video Soul on BET from 1983-1996 and many other network specials, he has made numerous television, film and video appearances. Donnie has also lended his smooth voice to several documentaries and movies. Check out the list below of some of Donnie's most notable works! 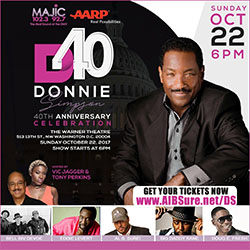